Henry John Gerstenberger, MD (1881-1954) had a great many achievements, including discovery of the first milk substitute for babies, SMA.  One I find interesting is this quote from "Medicine in Cleveland and Cuyahoga County:1810-1976", edited by Kent L. Brown. MD.  "...While traveling during the second year, he visited the Foundling Hospital in Florence, Italy.  Here he saw the famous della Robbia plaque of the swaddled bambino.  Gerstenberger returned with a copy of the plaque and it later became the logo for the Babies and Childrens Hospital and eventually for the American Academy of Pediatrics."

Liborius Gerstenberger, from Wurzburg, visited New York in 1904 and wrote his impressions for the German Press.  See:  http://www.glocalweb.de/joerg/html/trans/oltmann01.htm .  Anyone know any more about him?

J. Gerstenberger of Leignitz was a piano maker.  He made this piano in about 1930.  Paul J. Gerstenberger found it in Melbourne, Australia, and had it shipped to his home in Boulder, Co. 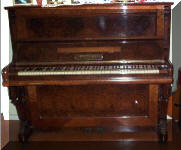 There was another Gerstenberger piano maker, in Vienna.  Bach mentions him in a letter, which I lost track of.  If you come across it, please send me a copy.

Duane F. Gerstenberger appeared in a recruiting ad for the Army, in 1983, in JAMA and other publications, and his daughter, Mauri (Marie) G. Mays, appeared even earlier in 1978, in People, Glamour, and others.  See both of them below:

In this family, we are photogenic from an early age!  The next one is Duane's granddaughter Ruthy Celerina Gerstenberger, advertising for one of her father's businesses.